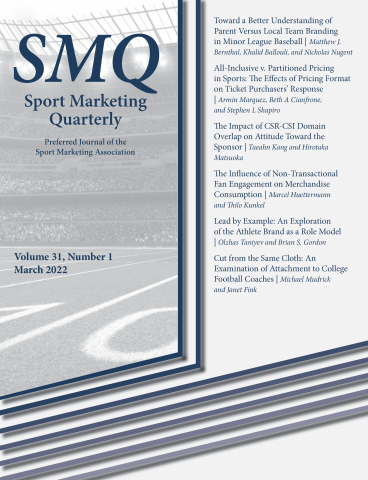 Articles in this Issue

This research examines the effects on team loyalty of two minor league branding strategies, naming the team after its parent major league team or naming it after the local community in which it exists. We propose a mediation model in which four constructs (i.e., team identification, social bonding, community group experience, and pride in place) mediate effects of brand type on team loyalty, predicting that local branding will generate stronger team loyalty through these constructs. We also propose that place identity moderates the mediating effect of each of these four constructs. Structural equation modeling was used to test the mediation model, and moderated mediation tests using the bootstrapping method were used to test the moderating effects of place identity. Results revealed support for the model, indicating partial mediation of brand type effects on team loyalty for each of the four constructs, as well as a moderating effect of place identity.

Sport organizers may employ one of two common pricing strategies—partitioned pricing (PP) and all-inclusive pricing (AIP)—to present the price of the ticket and associated fees to potential consumers. The study examines differences in spectators’ price recall, perceived value, and search intentions when purchasing tickets to attend a regular-season Major League Baseball game based on the pricing format experienced (PP v. AIP), as well as the moderating effect of price tier selected, and participants’ level of team identification on the impact of the pricing format. Findings point to both theoretical and managerial implications associated with the significant effect that the pricing strategy has on the outcome variables. Although the moderating effect of price tier and team identification were nonsignificant, both variables had a direct influence on the dependent variables considered.

The Influence of Non-Transactional Fan Engagement on Merchandise Consumption

Lead by Example: An Exploration of the Athlete Brand as a Role Model

Considering the academic literature regarding athlete brands as role models is largely fragmented, the present study contributed significantly to this evolving construct and our understanding of the impact superstar athletes have on their consumers. Specifically, the central aim of this exploratory study was to uncover the traits of the athlete brand as a role model from the perspective of the sport consumer. Thirty-one consumers of the athlete brand were purposefully selected to participate in semi-structured interviews. The interview data revealed four prevalent themes including personal attributes, community impact, idealized parental figure, and exemplar for other athletes.

Cut from the Same Cloth: An Examination of Attachment to College Football Coaches

With increased exposure on college athletics, coaches are often subject to augmented attention from fans. However, little research has focused on the drawing power that coaches exude as essential components of the sport product. Given the tenets of social identity theory, which focus on the value of group membership and the development of prototype characteristics and associated biases within a group and its leaders, it is reasonable to suggest that coaches induce fan attachment. Multiple regression analyses revealed that perceived congruence between the coach and prototype for the program was positively related to attachment to a coach. Team identification moderated that relationship. Additionally, attachment to a coach was positively related to behavioral intentions. These findings contribute to sport social identity research regarding preferred leadership characteristics. Practically, a demonstration of the salience of congruence between coach and perceived attributes related to program norms may serve as an integral marketing tool.